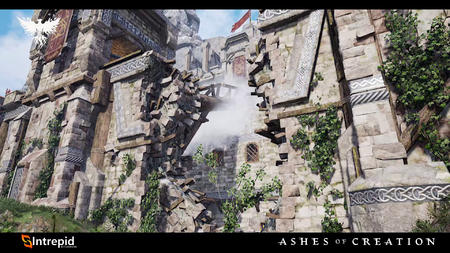 This is the castle siege destruction props. It's variable areas of exploded stuff. You can't completely destroy the castle or you wouldn't be able to get to the top of it.[1] – Michael Bacon

We want destruction to be a very core element of how players make their way through the world.[3] – Steven Sharif

There will be ways to repair destructible structures (such as walls and gates) and also repair (or re-craft) siege weapons that were damaged during sieges.[11]

You could be more precision oriented in the decision to attack a city. Let's say it's a rival node that's trying to reach you know a node stage five or something and you want to disable their ability for the religious system to progress so you target the temple during the attack, or you want to disable their scholars academy from reaching a higher level so that your nodes can; or you want to disable multiple buildings that allow for experience and quests to be undertaken by its citizenship, which prevents them from keeping up in pace of experience gained with your node. These can be more precision oriented and don't have to effectualize an actual takeover of the node.[4] – Steven Sharif 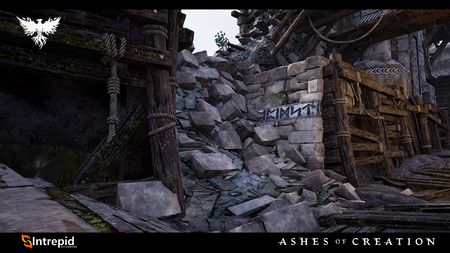 When a node levels up it maintains the same feeling. So it feels like it's growing out from its city center; and it has this identity that it kind of evolves; and people get to understand it. But then when it gets destroyed and it starts over again and people re-level it, it's completely different the next time.[12] – Jeffrey Bard

Nodes can be destroyed starting at Village (stage 3) and are destroyed through sieges.[13]

After a node is destroyed there will be a debris field containing spoils that are lootable to the victors of the siege.[16][5][17][18]

What happens when the node gets destroyed is there will be stockpiles of spoils... A whole host of what is centralized within a regional economy like the node system becomes- a portion of that becomes available to the attackers who participated in the siege and they can go and interact with those with those debris fields and attempt to claim things.[16] – Steven Sharif

Nodes can be destroyed starting at Level 3 - Village Stage, and are destroyed through sieges. Sieges are started via an item which is acquired through a quest that scales in difficulty with respect to the level of the Node which is being targeted for the siege. Once the item is brought to the Node and is activated, the declaration period begins and a countdown is initiated for players in the region to see. This countdown runs for a number of days equal to the level of the Node being sieged. Once the countdown is complete, the siege begins. There is a cooldown between sieges, and players must wait a certain amount of time after an unsuccessful siege before a new siege can be declared. The higher the Node level, the longer the cooldown between sieges. If a siege is successful, then the Node is brought down to Level 0, and anyone who was a citizen of that Node is no longer a citizen.[13] – Margaret Krohn

The looting rights have a period of time in which the attackers have loot rights essentially. So these are people who participated in the attack- they were flagged attackers during the siege and they have first dibs; and then if after that period of time... that looting right dissipates then it becomes open..[21] – Steven Sharif

Following a node siege, static housing will be scaled back or destroyed based on the advancement of the node.[9]

Apartmanok may be destroyed in the following circumstances:[9]

Freeholds may be attacked by any player[23] for a period of two hours[13] following a successful siege against its parent node.[24]

After the two hour period of open combat following a successful node siege, any remaining freeholds will exist under a grace period for roughly 1 week where another node may take over the zone of influence of the freehold.[23][13]

If a siege is successful, then the Node is brought down to Level 0, and anyone who was a citizen of that Node is no longer a citizen. Freeholds within the Zone of Influence are subject to a period of vulnerability. These Freeholds can be destroyed by other players during a period of roughly 2 hours after a successful siege. Destroyed Freeholds are subject to material loss, and blueprints for them are mailed to the player to utilize for future placement in order to allow the player to keep their Freehold’s layout and structure. Once the vulnerability period is complete, any remaining Freeholds will exist under a grace period for roughly 1 week where another Node may take over the Zone of Influence of the Freehold.[13] – Margaret Krohn

Dynamic destructibility of ships is under consideration.[27]

I mean traditionally if we did not use dynamic destruction, that what we would use is decals to simulate damage on the ship based on an overall hit point value. At certain hit point values we would swap out the mesh to show a more destructive state potentially; and that and you know at that point for a user in regards to immersion you know both are very similar from the immersion factor right?[27] – Steven Sharif